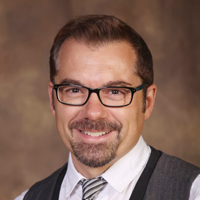 Students and patients alike know Mark T. Garry, MD, for his dedication to going the extra mile to ensure that the person in front of him is heard, respected, and well cared for.

A few years back, Dr. Garry noticed that his next patient, a shy boy who had been bullied extensively in school, had tucked his pants into his socks. Before inviting the boy into his office, Dr. Garry tucked his pants into his socks in a similar fashion, as did the medical student who was training with him. When the boy saw what they had done, his face lit up and he opened up to the pediatric psychiatrist in ways he had never done before, his mother later recalled. Dr. Garry’s innate ability to see each patient as a unique individual enables him to connect with the most vulnerable and underserved while modeling for learners a patient-centered approach that exemplifies the very best qualities of the profession.

Now head of psychiatric education at the Rapid City Regional Behavioral Health Center and assistant professor at the University of South Dakota Sanford School of Medicine (USDSSOM), Dr. Garry encourages learners to harness empathy as the best way to achieve their highest potential as physicians. His life and clinical lessons have staying power, and the USDSSOM Class of 2016 awarded Dr. Garry the Anton Hyden Distinguished Professor Award for being the physician who most inspires and assists medical students during the clinical years.

Previously, Dr. Garry spent nine years at the Sioux San Indian Hospital in Rapid City, providing critically needed mental health services to Native Americans. As a key member of the Suicide Prevention Committee for Rapid City and the Governor’s Task Force for State Suicide Prevention, he helped develop protocols for reducing the suicide rate among indigenous populations. He has also worked nationally to enhance access to child and adolescent psychiatry through telemedicine, for which he received the Secretary’s Award for Distinguished Service from the U.S. Department of Health and Human Services in 2006.

In addition to modeling for students the qualities of humanism in medicine, Dr. Garry models the importance of living a full and balanced life. He moonlights as a professional DJ (DJ Mental) and volunteers at his wife’s yoga studio and holistic healing clinic.

Dr. Garry earned his MD from the Emory University School of Medicine, where he was also a Robert W. Woodruff Fellow in Medicine. He completed his residency in psychiatry at Baylor College of Medicine. He was also a Laughlin Fellow of the American College of Psychiatry, and he represented psychiatry residents on the administrative board of the AAMC’s Organization of Resident Representatives.