What happens when doctors exchange the white coat for a hospital gown? Physicians learn the importance of empathy and language and gain an appreciation for the trauma of illness.

Robert Klitzman, MD, was 43 when his body gave out on him.

It was right after two planes flew into the twin towers in New York City. Klitzman’s 38-year-old sister was on the 103rd floor. He and his family never heard from her again.

Klitzman’s whole body ached. He couldn’t get out of bed. He didn’t want to listen to music or watch television. He must have some kind of flu, he thought.

After all, Klitzman, a professor of psychiatry at Columbia University, would know depression and grief if he saw it. Right?

“Any movement hurt,” Klitzman remembers. “We see patients with somatic symptoms and we think, ‘They’re just not psychologically minded.’”

But Klitzman was wrong. He was suffering from crippling grief, which until then he had only witnessed as an outsider.

“I had no idea it would be so different than what I thought it was,” Klitzman says. “I had not appreciated what my patients undergo when they have grief and depressive symptoms.”

After three months of not eating, not sleeping, and generally ceasing to function, Klitzman overcame the stigma and accepted his depression. He could finally understand the barriers his own patients faced.

“I had not appreciated what my patients undergo when they have grief and depressive symptoms.”

He went to psychotherapy, his temple, and for the first time, a Buddhist service. He took time for himself — he sat in Central Park doing nothing for hours on end.

It was that self-care that allowed Klitzman to have some semblance of normalcy. Today, he teaches psychiatry at Columbia University and wrote a book called When Doctors Become Patients, which weaves together intimate interviews with physicians who have fallen ill.

Klitzman is just one medical professional who has gotten a glimpse of what it is to be on the other side. To see firsthand that the white coat — while coveted and respected — does not make one exempt from illness.

AAMCNews spoke to several doctors willing to share their own experiences as patients. Here are their stories, the lessons they learned, and the ways in which their time in the hospital changed the way they treat patients.

“She’s circling the drain,” the doctor said. “She’s trying to die on us.”

Rana Awdish, MD, a critical care physician at the Henry Ford Hospital in Detroit, Michigan, knew the doctor was talking about her.

She had been out to dinner with her best friend when an undiagnosed benign tumor in her liver ruptured. She was seven months pregnant.

Awdish’s entire blood volume wound up in her abdomen, causing what’s known in trauma as the "triad of death.” Her blood was too acidic and too cold to clot.

She was bleeding out. Her liver and kidneys shut down. She had a stroke.

“I very quickly went into multisystem organ failure and essentially became one of my own patients in a matter of hours,” Awdish says.

Awdish knew the doctor’s words weren’t coming from a place of malice. She had used the same type of language herself. At the time, then 35, Awdish had just finished her pulmonary and critical care medicine fellowship. It was her last day of training.

“One realization I had was that physicians tend to speak to each other rather than thinking about the impact their words will have on their patients,” Awdish says. “The patient is at risk of becoming an object.” 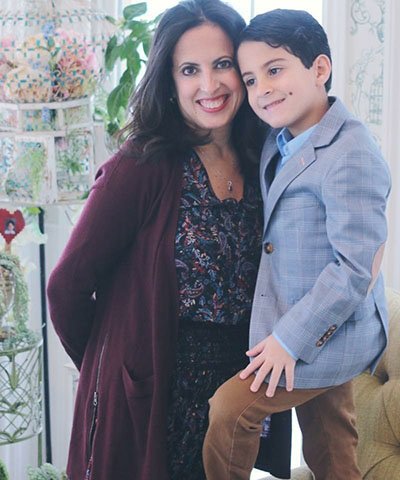 Her baby died, and at moments, Awdish thought she might, too.

She was in and out of the hospital for years and needed five major surgeries. She had to learn how to walk and talk again.

During that time, she experienced miscommunications, uncoordinated care, and even blatant insensitivity.

One doctor assumed she was an addict because morphine wasn’t quelling her pain. Another doctor joked they needed to find her a new liver unless she wanted to live in the hospital forever.

But Awdish also remembers the small acts of kindness that helped her pull through. A transporter who took her to radiology heard Awdish break down when she was asked about her baby. He instructed his colleagues not to ask about the baby. Radiology techs would cover her sleeping husband with a blanket.

Awdish made it through the long journey of recovery, and now has an 8-year-old son named Walt. She wrote about her story in her book, In Shock: My Journey from Death to Recovery and the Redemptive Power of Hope.

And she came out on the other side a very different doctor, she said. She realized the abject vulnerability of being a patient, and now thinks about how each one of her words will affect someone in the hospital setting.

Her education had taught her how to treat disease. But it didn’t prepare her to treat the person.

“When I finished my training, I was entirely oriented to disease,” Awdish says. “And patients were the thing disease happened inside of.”

She adds, “Listening more is the first step in trying to understand who anyone is.”

A simple “you’ll be OK” goes a long way

Michelle Sullivan, DO, a family medicine physician in Mokena, Illinois, grabbed her husband by the shirt. “I think I’m having a heart attack,” she said at the time. “Take me to the hospital, or I am going to die.”

Michelle and her husband, William Sullivan, DO, JD — an emergency department doctor at St. Margaret's Hospital in Spring Valley, Illinois — raced to the hospital. He held her hand on the way, keeping his finger on her wrist.

“Stop checking my pulse, damn it. You’re making me more nervous,” she told him.

They remember that day well. It was right before Christmas in 2016. Michelle wasn’t sure their four children would have a mother at the end of it.

“I knew I was in a bad heart rhythm. It was petrifying,” she remembers. “One of the most frightening experiences of my life. I couldn’t catch my breath.”

Once they arrived at the ER, an EKG showed she was in rapid atrial fibrillation — an irregular and quick heart beat — with a rate of 170.

After several minutes of waiting — and panicking — William decided to take matters into his own hands. He began digging through unlocked drawers, hoping to hook her up to the cardiac monitor himself. All he found were extra gowns, urinals, and some random alcohol pads.

Four hours elapsed before they were moved from the emergency department to the telemetry floor. It was 3 a.m. They each slept off and on, but the waking minutes were agony.

“I realized that what I wanted when I got there was just to hear that she was ok,” William said.

Eventually, she had a battery of tests. The echocardiogram was normal. Her thyroid was normal. The D-dimer — a test for blood clots — was also normal. Her heart began beating more slowly and regularly.

But all it took was one false alarm to change the way both Michelle and William practice medicine.

“I try to incorporate better explanations into my own practice now,” William wrote in Emergency Physicians Monthly. “The funny thing is that I find many times (not all the time, though) patients don’t necessarily want a slew of tests. Often, they just want someone in a white coat to tell them that everything is ok, that they probably don’t have cancer or a heart attack, or that their child isn’t going to die from a fever.”

As an emergency department physician, William makes an effort to at least peek his head in when someone arrives just to give them some reassurance.

As for Michelle, she said the experience has made her more sympathetic to her patients.

“When someone says they can’t catch their breath, my heart goes out to them. Been there, done that,” Michelle says. “I tell them they’re going to be ok on the other side and get back to normal life. It’s made me a better doctor.”

Lisa Roth, MD, told herself the lump was nothing.

After all, she was a pediatric oncologist who focused on leukemia and lymphoma. No way could she have cancer herself.

But when she read her own CAT scan in 2013, her heart sank. The lump on her neck was part of a larger mass in her chest. She had stage II Hodgkin’s lymphoma.

“It was just absolute panic, then trying to figure out the right doctors,” says Roth, the director of the Adolescent and Young Adult Lymphoma Program at NewYork–Presbyterian/Weill Cornell Medical Center and assistant professor of pediatrics and medicine at Weill Cornell Medicine. “The whole rest of the team is so important, you lose sight of that as a doctor. The nurses giving me chemo, other members of the care team. I don’t think I appreciated how important it was to have kind and caring people at every step of the way.”

Roth was treated with four cycles of chemo, and the disease went into remission. She had to miss five months of work. And when she returned, she couldn’t help but do her job differently.

It’s not just about being there to administer the treatment, she says.

“Having gone through that experience helps me guide patients through their hair falling out, through waiting for a scan to come back — things you don’t think about as a physician,” Roth says.

She shares her personal story with nearly every patient now. They keep in touch over the years and send her pictures of their babies and college graduations.

Her new perspective inspired her to launch the Adolescent and Young Adult Lymphoma Program at NewYork–Presbyterian/Weill Cornell Medical Center in 2014.

“I wanted to create a program that addresses the unique needs of a young person, ages 15 to 39, with a cancer diagnosis,” says Roth, who was 33 at the time of her diagnosis. “These patients can fall through the cracks. They often feel lost.”

Roth now goes back once a year for an annual checkup and was able to have two kids despite her aggressive cancer treatments. And she continues to use her own experience every day at work.

“The way the treatment impacts and hijacks your life — I didn’t have full appreciation for that until it happened to me,” Roth says. “It created a new dynamic with patients. Certainly a stronger relationship.”

So why does it often take falling ill to change the way physicians treat patients who become ill? It’s the change in perspective — much like the difference between understanding how to discipline a child and actually having a child, says Janis M. Orlowski, MD, MACP, chief health care officer at the AAMC.

“Living an experience is different than intellectually understanding an experience,” Orlowski says. “People don’t wake up and think, ‘I’m going to be rude to patients.’ I think they just don’t fully grasp the experience.”

Orlowski says her moment of clarity came when she broke her leg 10 years ago, and it was 12 months before she could run again.

“I really came to appreciate the recovery time that is necessary,” she says. “From that point of view, it was an ‘aha’ moment.”

But it doesn’t necessarily take a single traumatic event to gain that perspective, Orlowski adds. Every time she is on the exam table, or sitting in the waiting room with her father, she reflects on what it’s like to be on the opposite side of the doctor-patient relationship.

“I think we have to recognize that until we’re patients, we need to work to understand how our actions affect others and how the recovery process is,” she says. “It’s a lifelong learning experience.”