Women Were Majority of U.S. Medical School Applicants in 2018

The nation’s medical schools made notable gains in diversifying their entering classes in 2018, according to new data released today by the AAMC (Association of American Medical Colleges), which show increases in the number of women and those from some racial and ethnic groups applying to and enrolling in medical school this fall.

For the first time since 2004, more women than men applied to U.S. medical schools, comprising 50.9% of applicants. Women were also the majority of matriculants (new enrollees) to medical school for the second year in a row (51.6% versus 50.7% in 2017).

The 2018 data also show that the nation’s medical schools continue to attract and enroll more racially and ethnically diverse classes. The number of black or African American applicants increased by 4.0%, to 5,164 this year, while matriculants rose by 4.6% to 1,856 students. The gains for black or African American men are especially noteworthy, after years of minimal growth or declines: the number of applicants from this group grew 4.4%, to 1,851, and the number of matriculants rose 7.3%, to 734. 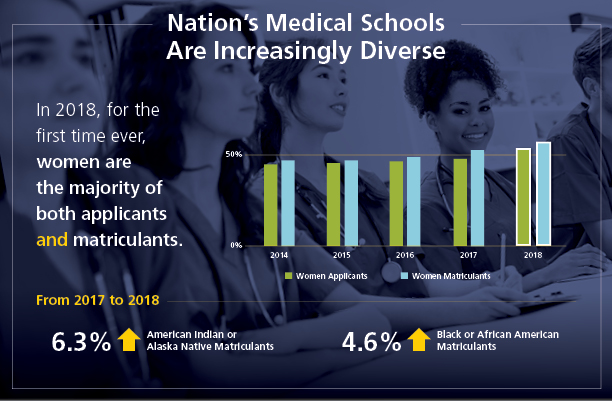 Note: The race/ethnicity data points include individuals who identified in one or more categories. Source: AAMC FACTS Tables as of Nov. 9, 2018.

American Indian or Alaska Native applicants rose by 10.0% to 559 and matriculants increased by 6.3%, to 218 this year. Despite this gain, a new report released by the AAMC and the Association of American Indian Physicians shows that American Indians and Alaska Natives have experienced slow and uneven gains in representation across the medical education continuum over the past 30 years.

“This year’s significant gains in the number of women and black men entering medicine is excellent news,” said Darrell G. Kirch, MD, AAMC president and CEO. “Medical schools have been working hard to increase the diversity of tomorrow’s doctors. While there is still much more work to do, we are very encouraged by this year’s progress.”

As in past years, medical school enrollees in 2018 had strong academic credentials: The average undergraduate GPA was 3.72 and the average MCAT® score was 511. This year’s entering class also demonstrates a strong commitment to service, cumulatively performing more than 12.5 million community service hours.

“Medical schools have expanded their enrollment to educate the additional physicians our nation needs to care for a growing and aging population, as well as address health crises, such as the opioid epidemic,” Kirch said. “But we will not sufficiently increase overall supply of physicians in the United States without creating more residency slots. It is more important than ever for Congress to lift the 1997 cap on federal support for residency positions to ensure that all patients have access to the care they need.”

The Association of American Medical Colleges is a not-for-profit association dedicated to transforming health care through innovative medical education, cutting-edge patient care, and groundbreaking medical research. Its members are all 154 accredited U.S. and 17 accredited Canadian medical schools; nearly 400 major teaching hospitals and health systems, including 51 Department of Veterans Affairs medical centers; and more than 80 academic societies. Through these institutions and organizations, the AAMC serves the leaders of America’s medical schools and teaching hospitals and their more than 173,000 full-time faculty members, 89,000 medical students, 129,000 resident physicians, and more than 60,000 graduate students and postdoctoral researchers in the biomedical sciences.

The AAMC (Association of American Medical Colleges) is a nonprofit association dedicated to improving the health of people everywhere through medical education, health care, medical research, and community collaborations. Its members comprise all 157 accredited U.S. medical schools; 13 accredited Canadian medical schools; approximately 400 teaching hospitals and health systems, including Department of Veterans Affairs medical centers; and nearly 80 academic societies. Through these institutions and organizations, the AAMC leads and serves America’s medical schools and teaching hospitals and the millions of individuals across academic medicine, including more than 191,000 full-time faculty members, 95,000 medical students, 149,000 resident physicians, and 60,000 graduate students and postdoctoral researchers in the biomedical sciences. Following a 2022 merger, the Alliance of Academic Health Centers and the Alliance of Academic Health Centers International broadened the AAMC’s U.S. membership and expanded its reach to international academic health centers.