No, a Step 1 failure won’t doom your medical career

New AAMC data show that a majority of U.S. MD applicants who fail the USMLE Step 1 exam on the first attempt still go on to a residency. Here’s what all students need to know about applying to residency.

Let’s be honest: The transition from medical school to residency is stressful. Students must choose a specialty, then apply to residency programs, interview, and go through a matching process. One of the key stressors is residency programs’ reliance on scores from the USMLE Step 1 exam, the first of three required exams for medical licensure, which program directors admittedly use to differentiate between the thousands of students who apply for residency slots.

In February, the exam’s two sponsors — the National Board of Medical Examiners and the Federation of State Medical Boards — announced that Step 1 would become a pass-fail exam no earlier than 2022. While that might lessen the anxiety somewhat, what happens if you fail Step 1? Is your career over?

Not by a long shot.

As you might imagine, there is great variability in how this works by specialty. Between 2013 and 2018, just over half of U.S. MD applicants applying in pediatrics with a Step 1 failure on the first attempt entered training in pediatrics. In a specialty like anesthesiology, between 2013 and 2017, about a quarter of U.S. MD applicants applying with a Step 1 failure on their first attempt entered residency in anesthesiology. Slightly more than a third entered training in a different specialty. The remaining applicants did not enter residency training. However, we know from longitudinal data that within six years after graduation from medical school, more than 99% of all graduates have records of graduate medical education training and/or are in practice in the United States. 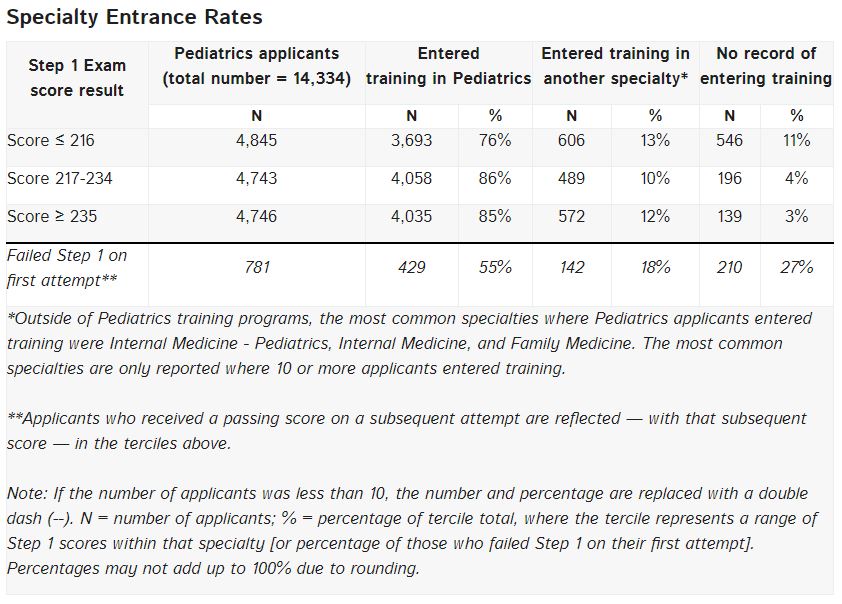 Failing Step 1 will impact a student’s application strategy, but it doesn’t usually mean their pathway to becoming a physician is over. These students may want to consider additional specialties where they will be more competitive and should speak with their advisors about their individual circumstances. Both the AAMC and the National Resident Matching Program® publish data on the number of U.S. MD seniors per slot, which is generally far fewer than the number of slots available.

Newly released data also tell us how many applicants applied in one specialty but entered training in another, by USMLE Step 1 tercile. We found 32% of applicants to orthopedic surgery between 2013 and 2018 with a score below 237 (the lowest tercile) eventually entered another specialty — most commonly general surgery, anesthesiology, or diagnostic radiology. However, 55% of applicants in orthopedic surgery between 2013 and 2018 with a score below 237 did enter orthopedic surgery. Although USMLE Step 1 scores have been viewed as overemphasized in the residency selection process, this shows that other factors are contributing to students’ success in securing a residency position even in highly competitive specialties. These newly published data might be particularly helpful for applicants considering parallel plans or for whom multiple specialties are appealing. Details of the study methodology can be found here. 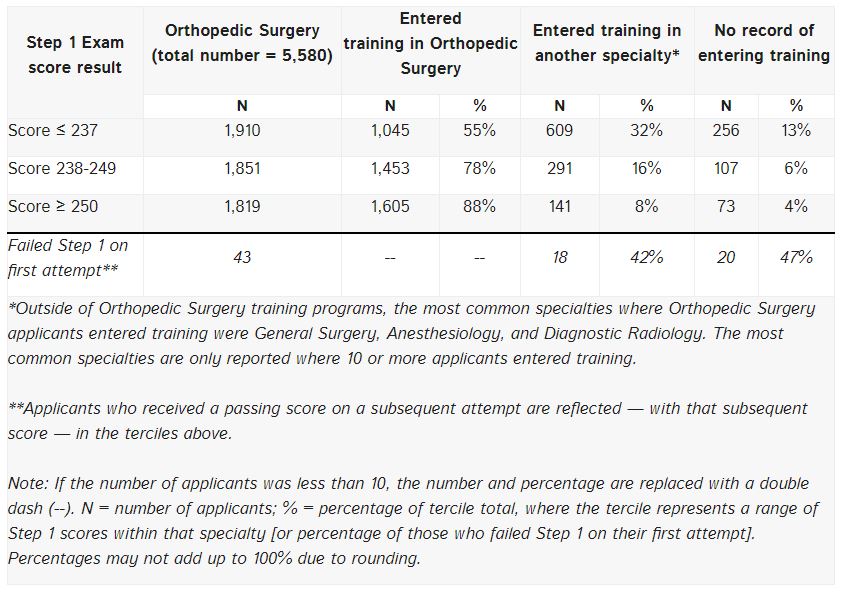 The average U.S. MD applicant (including U.S. MD seniors and prior graduates) submits 61.7 residency program applications, resulting in programs receiving hundreds, sometimes thousands, of applications for a limited number of residency positions. With increased frustration among overwhelmed applicants and programs, the AAMC started developing tools and resources to provide students with better information and address student anxiety during the transition to residency. We heard from the community that the lack of available data and information made it difficult for applicants to target their applications and for program directors to select applicants. AAMC data analyses to help applicants “apply smart” were first introduced in 2017 and have been expanded and further refined each year. Several other resources have been developed and tested, and applicants have better information today than they did a few years ago.

We’re far from done. The AAMC recently collaborated with eight national organizations in the medical education community to develop Residency Explorer, a website and database that launched on June 26 and allows students to compare residency programs. Users of a pilot version of the tool that was rolled out for the 2019 residency cycle said Residency Explorer is useful in gauging how they compared to matched applicants at a program and, after using the tool, they felt more confident about which programs they were applying to. Most notably, Residency Explorer’s success is possible because of the strong strategic collaboration and data contributions of these national organizations.

The clinical education of medical students has seen unprecedented levels of disruption and change as a result of COVID-19. The Coalition for Physician Accountability, of which the AAMC is a member, released a set of recommendations, Medical Students in the Class of 2021: Moving Across Institutions for Post Graduate Training, in May. The class of 2021 will apply and interview for residency positions while we are still in the midst of this pandemic, utilizing a revised ERAS® timeline and an increase in virtual candidate interviews in lieu of in-person interviews.

For many years, the decision about which applicants will be invited to interview with residency programs has often been heavily weighted by USMLE scores. Perhaps, with the broadened use and ease of virtual interviews this year, residency programs can offer more virtual interviews than those offered in person and meet a larger number of candidates than was previously possible. However, if residency programs increase the number of interview opportunities, medical school advisors must counsel students to accept interviews only from programs they are most interested in. Let’s use this as an opportunity to improve the status quo and encourage everyone to conduct themselves in a professional manner. Operationalizing the widespread use of virtual interviews into the residency selection process should be done in a manner that maximizes the effectiveness of the interview for both applicants and programs.

The AAMC cannot solve all the challenges of the transition to residency alone. We will need to continue to collect data and work with national peer organizations, and each specialty will need to determine how best to address particular issues. But we hope that providing better data to all involved in residency selection will improve the process. I’d love to hear from you about how else we could do that. You can email me directly at agrover@aamc.org.

Atul Grover, MD, PhD, is the executive director of the AAMC Research and Action Institute.