Enrollment in the nation’s medical schools continues to grow, but leaders at many of those schools worry that there are not enough residency programs and clinical training sites for students to complete their requirements to become medical doctors, according to a new report from the Association of American Medical Colleges (AAMC).

Nearly 21,900 students matriculated into medical school for the 2019-20 academic year, continuing an upward trend that has seen enrollments grow by 33% since 2002, according to the AAMC’s annual survey of MD-granting schools. But the number of residencies available for medical school graduates has not kept pace with the increase in students — a dilemma that threatens to exacerbate the nation’s physician shortage, the report warns.

“Even with this remarkable growth in enrollment, unless graduate medical education grows as well, we’re not going to be producing more physicians,” says Michael Dill, director of workforce studies for the AAMC.

In the survey, administered in November 2019 to 154 medical schools, 68 of the schools (44%) reported being concerned about whether their incoming students would find appropriate residency positions after graduating, and a large majority said they are concerned that there aren’t enough clinical training sites for their students.

To address concerns about the nation’s growing physician shortage, the AAMC recommended in 2006 that by the 2015-16 academic year, first-year medical school enrollments should increase by 30% over the total from the first year of the survey, which was 2002-03. Enrollments reached that goal in 2018-19 — three years after the target date.

The enrollment expansion “will not resolve the projected shortage” in physicians, the report says, because the number of residencies available for medical school graduates has not increased at the same rate as the increase in students in the United States. Some 44% of schools reported “major” or “moderate” concerns about their incoming students’ ability to find residency positions of their choice after medical school — a figure that has held steady since 2017.

The concern stems from a two-decade long congressionally imposed cap on federal support for graduate medical education (GME) through the Medicare program, which is the largest public contributor to GME funding for residencies. The Medicare cap effectively freezes a teaching hospital’s Medicare GME support at 1996 levels — despite efforts by teaching hospitals, medical schools, physicians, and the AAMC, among others, to get Congress to raise the cap to fund more graduate training slots and help meet the health needs of the U.S aging population.

“The federal cap on GME is the main driver of the concern over insufficient residencies,” Dill says.

While most major teaching hospitals provide additional support for resident positions over the Medicare cap through clinical revenue, and many states support residencies through Medicaid GME, Dill notes that “none of that has been enough” to meet the need for residency slots. This year, 40,084 MD and DO graduates applied for 37,256 residency positions in the Main Residency Match®, according to the National Resident Matching Program®.

Percentage of schools concerned about the supply of:

The concerns stem largely from growing competition for clerkship opportunities from other health care students and trainees, such as nurse practitioners, physician assistants, and those with DO degrees. In 2018-19, first-year enrollment at DO-granting schools reached 8,124 — a 164% increase over first-year enrollment in 2002-03, the report says.

“You’ve got many more students competing for those clinical rotations slots. The supply just isn’t there,” Dill says. The rising demand “is putting too much of a crunch on that part of the training process.”

Medical schools also cited pressure from clinical sites to pay for the student rotations as impeding their ability to place students at those sites. Although a slight majority of MD-granting medical schools do not pay for their students to have clinical rotations, the survey found that the practice is generally trending upward: rising from 39% of medical schools paying for at least some sites in 2015 to 44% in 2019. 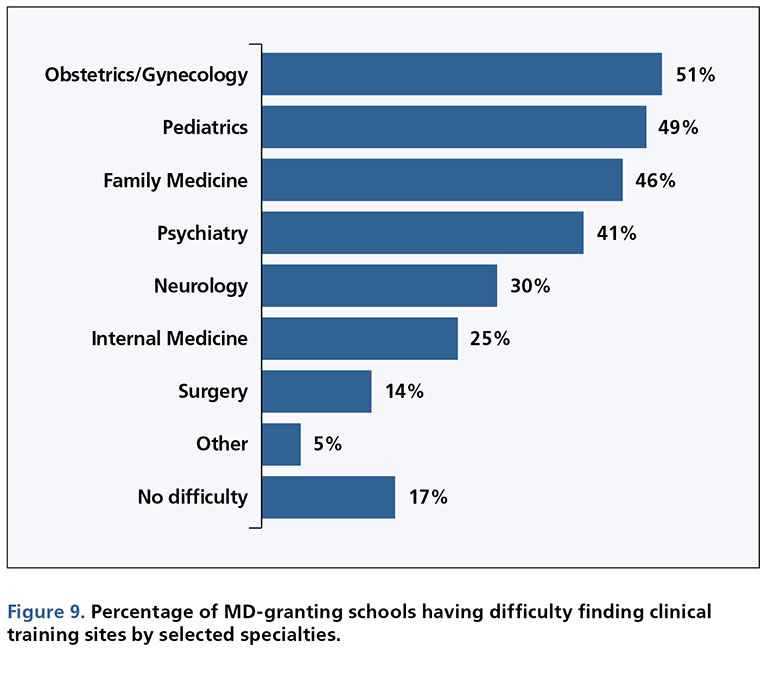 Schools reported trying a variety of strategies to mitigate shortages in clinical training sites and preceptors. The most common methods included: