Renowned London surgeon Robert Liston had the two qualities most valued among his peers in pre-anesthetic medicine: speed and strength. At 6 feet, 2 inches, he stood eight inches taller than the average British man — a “giant for his time.” He purportedly could remove a leg in less than 30 seconds, and in order to keep both hands free, he often clasped the bloody knife between his teeth while working. 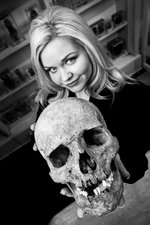 But Liston’s speed didn’t always pay off. There was the time he sliced off a patient’s testicle while removing a leg. During his most famous surgical slip, Liston worked with such speed that he cut off three of his assistant’s fingers and slashed an innocent bystander’s coat. Both the patient and assistant died of gangrene, and the spectator died of fright. “It is the only surgery in history said to have had a 300 percent fatality rate,” writes Lindsey Fitzharris, PhD, author of The Butchering Art: Joseph Lister’s Quest to Transform the Grisly World of Victorian Medicine.

Fitzharris, who spoke at Learn Serve Lead 2018: The AAMC Annual Meeting, admits she has always had a fascination with the macabre, from hunting ghosts as a child to spending hundreds of hours combing through diaries, medical casebooks, and letters researching her debut book, which won the 2018 PEN/E.O. Wilson Literary Science Writing Award.

“I like to say the book is a love story between scientific theory and medicine,” Fitzharris says. Indeed, while the medical field is inherently forward-thinking, with the next major treatment or cure always on the horizon, it wasn’t that long ago that surgery was so brutal — and infections so rampant — that patients rarely survived. Even medical students were at risk: Between 1843 and 1859, 41 young doctors-in-training died after contracting infections at St. Bartholomew’s Hospital in London, Fitzharris notes.

This was, of course, before Joseph Lister discovered the antiseptic approach to wound-healing in the 1860s. As a professor of surgery in Glasgow, Lister lowered surgery death rates by covering wounds in dressings soaked with carbolic acid.

Before Lister’s discovery, “hospitalism” — a catch-all term for any number of infections that ravaged most patients who passed through hospital doors — claimed lives for decades. And before ether made an appearance as an anesthetic, a chorus of agony-filled cries combined with the hacking of limbs could be heard throughout operating theaters filled to the brim with eager spectators.

Here are four moments in Fitzharris’ book that paint a clear picture of just how far we’ve come:

What can we learn from the past? 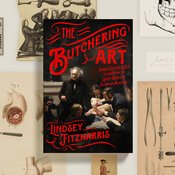 Lister tried to educate his colleagues about the way in which infections spread, and at the time, it largely fell on deaf ears. “This is exactly the take-home I want people to think about,” Fitzharris says. “We see this playing out in science and medicine constantly.”

In two centuries, future scientists will likely look back on our current practices and marvel at the ignorance of their ancestors. “I hope medical professionals and scientists try to keep this lesson in mind,” she says. “What we know today isn’t what we’re going to know tomorrow.”