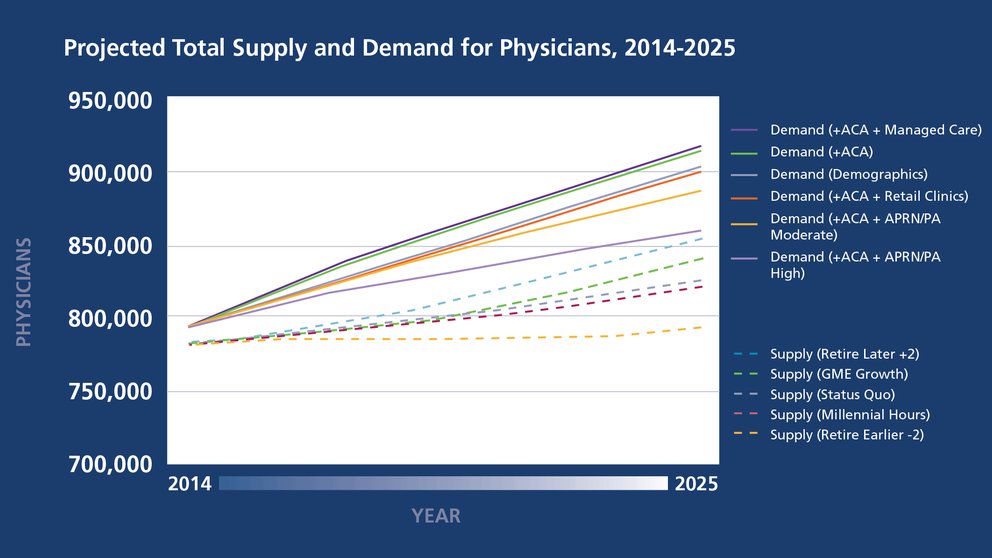 The United States will face a shortage of between 61,700 and 94,700 physicians by 2025, with particularly large shortfalls in certain surgical specialties, according to a new study commissioned by the AAMC and released in April.

“This continues to be a well-researched and statistically sound projection of a physician shortage over the next 10 years,” said Janis M. Orlowski, MD, AAMC chief health care officer. “It’s important to look at this over 10 years because it takes us about that long to train a physician depending on the specialty. Our workforce plans need to start now.”

The report, conducted by the Life Science division of the global information company IHS Inc., is an update to a 2015 analysis and reflects feedback from the health care research community, as well as the most recent workforce data.

Projected physician shortages have increased slightly for all specialties. For primary care, there will be a shortage of between 14,900 and 35,600 physicians by 2025. Non-primary care specialties—including medical specialties, surgical specialties, and other specialties—are expected to experience a shortfall of between 37,400 and 60,300 physicians, compared with 28,200 to 63,700 in 2015. In particular, the supply of surgeons, both general and specialty, is expected to decline, with a shortage of between 25,200 and 33,200 surgeons. The shortage of surgeons will have a significant effect on general surgery, vascular surgery, and neurosurgery. For other specialties—emergency medicine, anesthesiology, radiology, neurology, and psychiatry, among others—the projected shortage is between 22,200 and 32,600 physicians.

“These updated projections confirm that the physician shortage is real, it’s significant, and the nation must begin to train more doctors now if patients are going to be able to receive the care they need when they need it in the near future.”

“These updated projections confirm that the physician shortage is real, it’s significant, and the nation must begin to train more doctors now if patients are going to be able to receive the care they need when they need it in the near future,” said AAMC President and CEO Darrell G. Kirch, MD.

For the first time, the 2016 report includes a special analysis of the needs of underserved populations. These data show that if underserved patients had barriers to utilization removed, the United States would need up to 96,000 doctors today to meet all patient needs.

“The shortage is probably much greater if we are successful in eliminating barriers to health care,” Orlowski said. “From my point of view, it is a moral imperative that we try to eliminate the financial, cultural, social, and geographic barriers that keep people from obtaining health care. And, as that begins to happen, we will need to be sure we still have enough physicians so that we do not have disparities based on insurance, geography, or race.”

The primary factors driving demand are population growth and an increase in older Americans, according to the study. The U.S. population is expected to grow by about 8.6 percent from 2014 to 2025. During the same time period, the number of residents age 65 and older is expected to increase by 41 percent. Because seniors tend to require more specialized care than younger populations, the shortage in certain specialties—vascular surgery and cardiology, for example—will not keep pace with demand.

Kirch noted that in 2014, 45 states had fewer psychiatrists relative to their populations than they had in 2009, despite more than 43 million adults in the United States reporting a mental illness. “As a psychiatrist, I have seen firsthand what it means for patients not to be able to receive the care they need. These projected shortages are very troubling and only reinforce the importance of ensuring that all patients have access to health care for their physical and mental well-being,” Kirch said.

For all specialties, the report cites, retirement decisions of practicing doctors will have the greatest impact on future physician supply. More than one-third of all active physicians will be 65 or older in the next 10 years.

Multiple approaches will be necessary to address the pending shortage, Orlowski said. The AAMC supports a multipronged solution that includes delivery innovations, better use of technology, and other health professionals, and increased federal support to train an additional 3,000 new physicians per year over the next five years. Medical schools have done their part to increase the overall number of physicians by expanding their class sizes, and now Congress must approve a modest increase in federal support for new doctor training if the United States is to increase its overall number of physicians, according to Kirch. After graduating from medical school, all new MDs must complete a residency to be able to care for patients independently.

Orlowski noted that many AAMC member-institutions are already transitioning to more efficient clinical care using team-based and interprofessional care, among other strategies. Institutions also are taking advantage of email, telemedicine, and other technology to respond to minor illnesses when appropriate.

“We believe this is a measured approach to deal with a problem that has the potential to affect every American. It strikes a balance between our nation’s budget constraints and what medical schools and teaching hospitals believe is our responsibility to meet the needs of patients,” Kirch said.

This article originally appeared in print in the April 2016 issue of the AAMC Reporter.