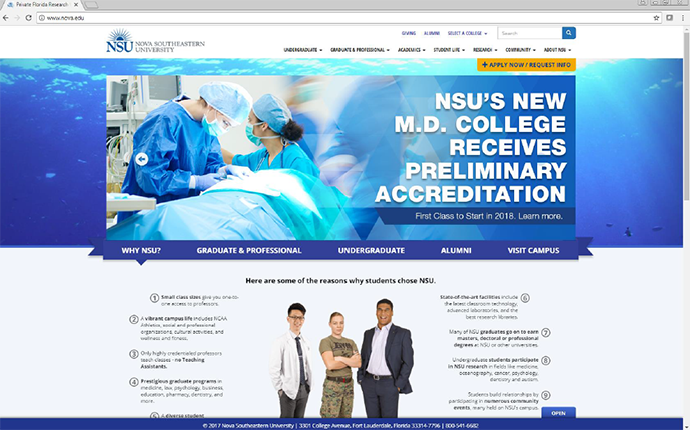 Starting a new medical school is a milestone event in which few communications professionals have the opportunity to participate. When Fort Lauderdale-based Nova Southeastern University (NSU) embarked to become one of fewer than 150 accredited Doctor of Medicine-awarding universities, it had to be prepared to compete against the likes of established programs throughout the nation and seven other Florida-based MD schools for the best and the brightest students. NSU underwent an aggressive pursuit and successfully earned preliminary accreditation by the Liaison Committee on Medical Education. Typically, the medical school application process for students is six months. NSU knew if it received the green light, it had half the time and had to make a name for itself quickly. That meant it needed to be ready to begin recruiting students as soon as it got the affirmative call, which came on Oct. 10, 2017.

NSU partnered with Starmark International marketing agency to create not one, but two websites. A temporary site had to be ready to begin recruiting students as soon as NSU got the call. The medical college simultaneously developed a second, more permanent site that it launched in January 2018 as it announced a $25 million gift to rename the college. The website led to the recruitment of a competitive charter class and has won several awards for its user interface and design. It is being used as a model for other colleges in the university due to its successes.

What was the most successful part of this website?

When the website launched, we saw a 598% increase in web sessions and 613% increase in page views, week over week. Ultimately, we received 1,965 primary applications, 30% more than we expected over an abbreviated application timeline.

Anything is possible with good planning and teamwork.