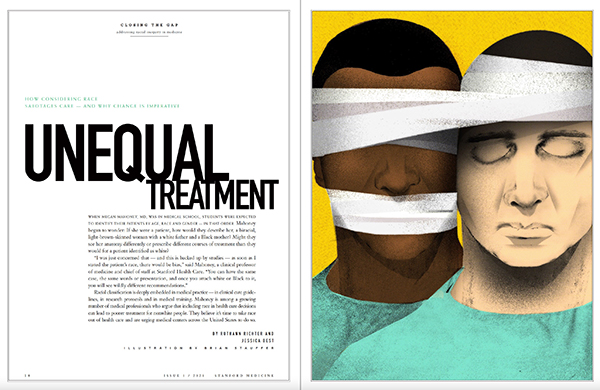 This story details the many ways in which racial bias has long permeated the practice of medicine, as well as the current effort to bring an end to the use of race in health care decisions. Treatment guidelines, use of pain medications and other drugs, and allocation of some organs for transplant are just some of the practices that are influenced by race, often to the detriment of nonwhite patients. These race-based practices are rooted in a history that cast some racial groups as biologically different — and inherently inferior. But the human genome project put this concept to rest, demonstrating that humans are nearly identical genetically. Now some groups, including the American Medical Association, are calling to end the use of race as a proxy in medicine; rather, they say clinicians need to consider social factors, such as housing, employment, and environment, that play a key role in a patient’s outcome. Medical schools like Stanford are working to incorporate this holistic view of patients into their training programs.

“When Megan Mahoney, MD, was in medical school, students were expected to identify their patients by age, race and gender — in that order. Mahoney began to wonder: If she were a patient, how would they describe her, a biracial, light-brown-skinned woman with a white father and a Black mother? Might they see her anatomy differently or prescribe different courses of treatment than they would for a patient identified as white? ‘I was just concerned that — and this is backed up by studies — as soon as I stated the patient’s race, there would be bias,’ said Mahoney, a clinical professor of medicine and chief of staff at Stanford Health Care. ‘You can have the same case, the same words or presentation, and once you attach white or Black to it, you will see wildly different recommendations.’”

What was the biggest challenge in writing this topic?
A voluminous amount has been written on this subject, in the lay and medical literature. For Ruthann Richter alone, her stack of articles was at least a foot thick. The challenge was to distill this into a 2,000-word story.

What was the most impactful part of your award-winning entry?
The article doesn’t just present a problem — the use of race in medicine — but offers a solution — renewed attention to the social and environmental factors that are the true drivers of differences in health outcomes.