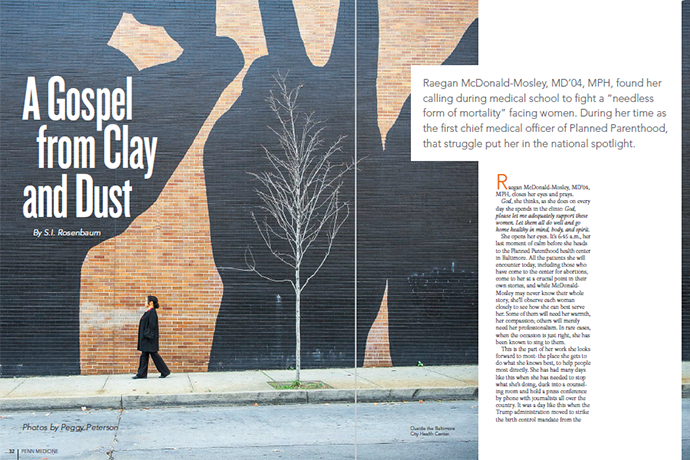 “A Gospel from Clay and Dust” by S.I. Rosenbaum
Penn Medicine Magazine
Perelman School of Medicine at the University of Pennsylvania

In the dramatic political polarization that emerged in the aftermath of the 2016 election, Penn Medicine magazine felt at risk of losing relevance — as any medically focused publication could. How could they tell a story that would connect with what readers were seeing in the world outside the confines of a clinical exam room — and, ideally, also connect back to it? The Penn Medicine staff chose to focus on the moment of the turning point, the before and after of Nov. 8, and to look at the lives of patients who were most vulnerable and most likely to be impacted by a variety of policy changes that had begun to take place, both within health care and beyond it. It wasn’t a question specific to Penn Medicine or any single institution, and it wasn’t an issue specific to political parties.

The opportunity to take that idea and mold it into reality emerged in the shape of Raegan McDonald-Mosley, MD, MPH. McDonald-Mosley, a 2004 alumna of the Perelman School of Medicine at the University of Pennsylvania, had been named the first-ever chief medical officer of Planned Parenthood in 2015. Although they knew relatively little about McDonald-Mosley’s life, the staff identified the overarching cultural themes that seemed most relevant. They asked writer S.I. Rosenbaum to explore those as well as the turning point concept and patient impact to find and tell the most compelling true story in a profile of McDonald-Mosley. She delivered.

What was the most impactful part of your feature?

Rosenbaum’s deftly structured and narratively detailed story connected McDonald-Mosley’s singing in church to singing to her patients, race and colorism, and politics of reproductive health.

Even if you don’t know enough to be sure what the focus of the story should be, sometimes it pays off to trust your instincts about a subject and trust a great writer to find out the rest.