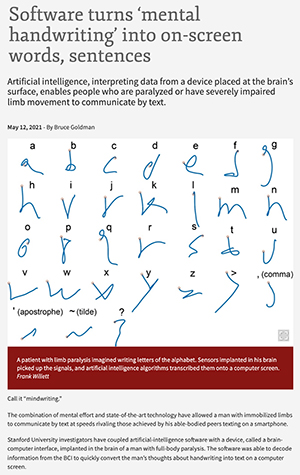 This piece was distributed as an embargoed news release on May 5, 2021, and published as a Stanford Medicine News Center article on May 12, 2021. The release explored how Stanford Medicine researchers used artificial-intelligence software to capture and interpret the thoughts of people who are paralyzed or have limited use of their limbs by enabling them to communicate by text on an electronic device. The procedure, which involves placing a brain-computer interface device on the brain’s surface, was able to decode the information gathered from the device to quickly convert one patient’s thoughts about handwriting into text on a computer screen — and do so at a speed that rivaled the speed of able-bodied people texting on a smart phone. A breakthrough in developing this method was the researchers’ realization that imagining oneself reproducing the swooping, accelerating, and decelerating motions of cursive handwriting provides much more information than does imagining the relatively same-speed vertical and horizontal movements of a cursor.

“Call it ‘mindwriting.’ The combination of mental effort and state-of-the-art technology have allowed a man with immobilized limbs to communicate by text at speeds rivaling those achieved by his able-bodied peers texting on a smartphone. Stanford University investigators have coupled artificial-intelligence software with a device, called a brain-computer interface, implanted in the brain of a man with full-body paralysis. The software was able to decode information from the BCI to quickly convert the man’s thoughts about handwriting into text on a computer screen. The man was able to write using this approach more than twice as quickly as he could using a previous method developed by the Stanford researchers, who reported those findings in 2017 in the journal eLife.”

What was the most impactful part of your award-winning entry?
The story was covered by multiple news organizations, including Voice of America News, BBC World News, The Times of London, ABC News, National Public Radio, CNN, the San Jose Mercury News, The Guardian, Scientific American, and Agence France-Presse.

What was the biggest challenge in writing this topic?
The study’s “innards” were immensely technical, involving highly sophisticated electronics and computer algorithms and a ton of jargon. The challenge was to find colloquial language with which to explain how it all works.