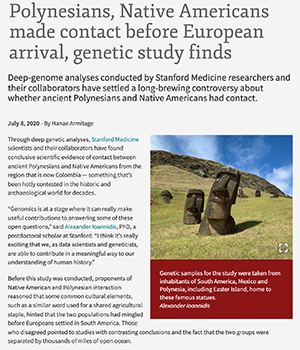 Through deep genetic analyses, Stanford Medicine scientists and their collaborators have found conclusive scientific evidence of prehistoric contact between Polynesians and Native Americans from the region that is now Colombia — something that’s been hotly contested in the historic and archaeological world for decades. Before this study was conducted, proponents of Native American and Polynesian interaction reasoned that some common cultural elements, such as a similar word used for a shared agricultural staple, hinted that the two populations had mingled before Europeans settled in South America. Those who disagreed pointed to studies with contrasting conclusions and the fact that the two groups were separated by thousands of miles of open ocean. This new study is the first to show, through conclusive genetic analyses, that the two groups indeed encountered one another and did so before Europeans arrived in South America.

“Before the study brought scientific evidence to the debate, the idea that Native Americans and Polynesians had crossed paths originated from a complex — both in its structure and origins — carbohydrate: the sweet potato. It turns out the sweet potato, which was originally domesticated in South and Central America, has also been known to grow in one other place prior to European contact. That place is known as Oceania, which consists of many islands, including the Polynesian islands. The overlap in culture made some archaeologists and historians think it was not only feasible, but likely, that the potato’s arrival in Polynesia was the result of the two peoples mingling.”

What was the most impactful part of your award-winning entry?
The article highlights groups of people whose stories are often untold. We largely learn about history as a series of European conquests. This story focuses on two non-European civilizations making contact, taking us out of our Eurocentric mind frame.

What was the biggest challenge in writing this topic?
The motivation behind this study came from a hotly debated historical mystery. The challenge was to weave together a story that balanced a historical mystery with the genetic advances that led to the team’s conclusions.