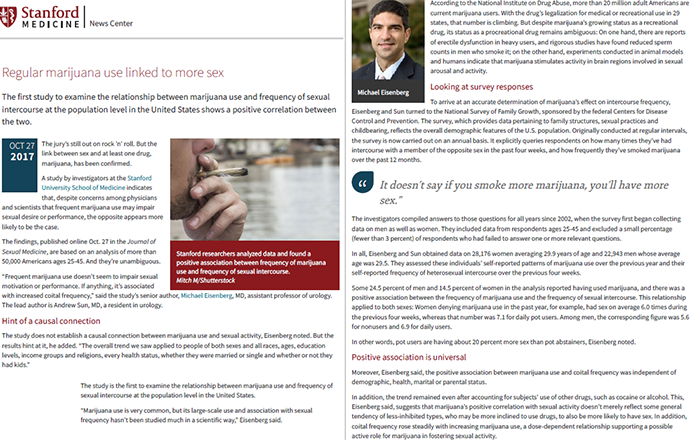 The paper by researcher Michael Eisenberg, which links frequency of marijuana use to frequency of sexual intercourse, was so obviously going to be a blockbuster that the chief concern was the likelihood that the “headline finding” of his study would obscure its caveats: (1) correlation doesn’t in itself establish causality; (2) the study in no way refutes legitimate reports of reduced fertility resulting from marijuana use; and (3) the study in no way suggests that the marijuana-sexual intercourse link holds up in conditions of excessive marijuana use. At the same time, Goldman still wanted to have some fun with this one.

What was the most successful part of your news release?

The release generated an astonishing amount of coverage from entities including NPR, The New York Times, and The Washington Post. Eisenberg says it led to increased donations, too.

The importance of emphasizing that correlation doesn’t establish causality, and that the marijuana-sexual intercourse link doesn’t necessarily hold up with excessive marijuana use.