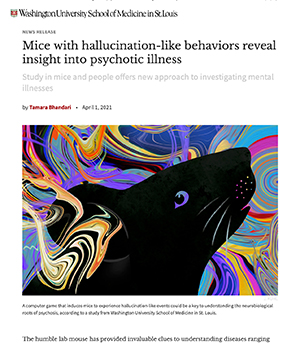 A new study showed there are important links between human and mouse minds in how they function — and malfunction. Researchers at Washington University School of Medicine in St. Louis devised a rigorous approach to study how hallucinations are produced in the brain, providing a promising entry point to the development of much-needed new therapies for schizophrenia. The study laid out a way to probe the biological roots of a defining symptom of psychosis: hallucinations. The researchers trained people and mice to complete a computer-based task that induced them to hear imaginary sounds. By analyzing performance of the task, the researchers were able to objectively measure hallucination-like events in people and mice. This innovative approach allowed them to study the neural circuits underlying hallucinations, opening up mental symptoms to the kind of scientific studies that have been so fruitful for diseases of other parts of the body.

“It’s so easy to accept the argument that psychosis is a fundamentally human thing and say, ‘Forget about mice,’ said senior author Adam Kepecs, PhD, a professor of neuroscience and of psychiatry, and a BJC Investigator at the School of Medicine. ‘But right now, we’re failing people with serious psychiatric conditions. The prognosis for psychotic patients has not substantially improved over the past decades, and that’s because we don’t really understand the neurobiology of the disease. Animal models have driven advances in every other field of biomedicine. We’re not going to make progress in treating psychiatric illnesses until we have a good way to model them in animals.’”

What was the biggest challenge in writing this topic?
The idea of hallucinating mice sounds silly, but the research was solid and could have important implications for debilitating and difficult-to-treat conditions. It was a challenge to make the story interesting without trivializing the work.