“The Invader” by Bruce Goldman 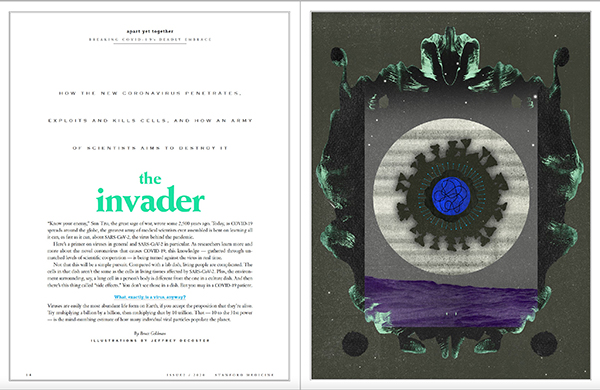 “The Invader” by Bruce Goldman
Stanford University School of Medicine

“The Invader” is an in-depth explanatory article intended to introduce nonscientists to the workings of viruses in general and to the virus that causes COVID-19 in particular, while highlighting Stanford Medicine contributions to COVID-19-related research efforts. The article explains how various experimental treatments being tested in the pandemic’s early days could interfere with normal viral activities — thus, it is hoped, curtailing or preventing infection and disease. Written as much as possible in jargon-free language that wouldn’t stump someone without a background in science, “The Invader” attempts to demystify SARS-CoV-2 so those who read it would be equipped to follow scientific developments as the pandemic matured.

“Viruses are easily the most abundant life form on Earth, if you accept the proposition that they’re alive. Try multiplying a billion by a billion, then multiplying that by 10 trillion. That — 10 to the 31st power — is the mind-numbing estimate of how many individual viral particles populate the planet. Is a virus a living thing? Maybe. Sometimes. It depends on location. ‘Outside of a cell, a viral particle is inert,’ virologist Jan Carette, PhD, associate professor of microbiology and immunology, told me. On its own, it can’t reproduce itself or, for that matter, produce anything at all. It’s the ultimate parasite. Or, you could say more charitably, it’s very efficient. Viruses travel light, packing only the baggage they absolutely need…” 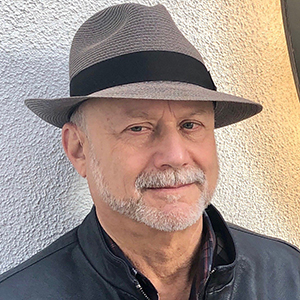 What was the biggest challenge in writing this topic?
I had to climb a steep learning curve, mastering not only general principles of virology but the intricate structure and physiology of the novel coronavirus, details of which were still being unraveled as I wrote “The Invader.”

What was the most impactful part of your award-winning entry?
Numerous unsolicited comments voiced appreciation for this article’s clarity and readability. It has had more than 60,000 page views on the magazine’s website and for several weeks it ranked No. 1 in Google's search result for the phrase, “What's a virus?”