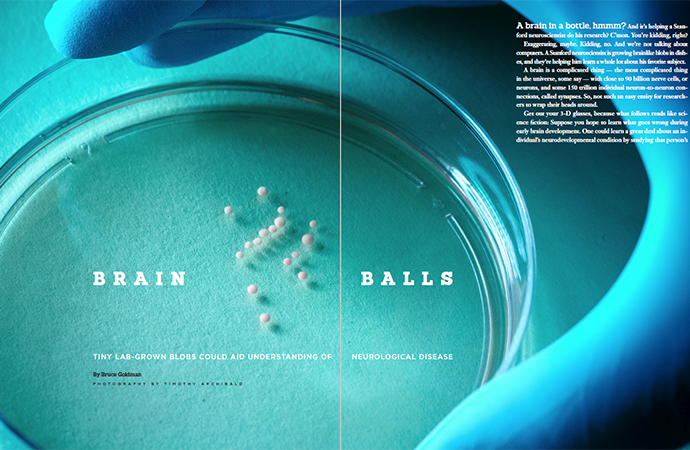 “Brain Balls” is a basic-science feature by staff writer Bruce Goldman. It was part of a theme package on unusual and potentially game-changing ideas being pursued by Stanford scientists. Goldman had been tracking the research of Sergiu Pasca since Pasca published a 2015 methods paper about a process for creating tiny cortical spheres in lab dishes. The work was amplified in a 2017 paper in which Pasca described generating two separate human brain regions in a dish and observing the subsequent migration of neurons from one region to appropriate targets in the other. Goldman thought the time was right to give the work magazine treatment and proposed a feature to magazine editor Rosanne Spector.

What was the most successful part of this feature?

Pasca told me his selection as one of The New York Times’ 2018 “Visionaries in Medicine” was triggered by this article, and donors and visitors loved it.

In the course of writing the article, I learned of the crucial role Pasca’s wife, Anca, had played in the research.