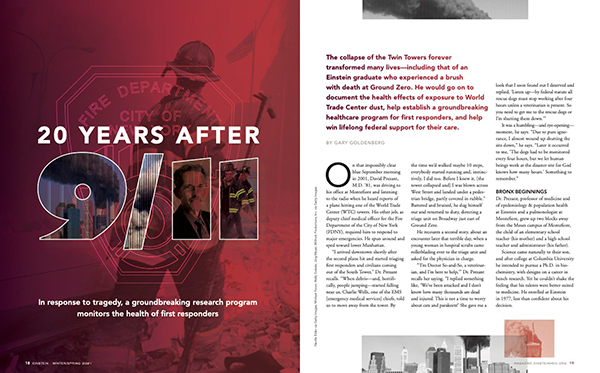 “20 Years After 9/11,” the cover story of Einstein magazine’s Winter/Spring 2021 issue, looks back at one of America’s greatest tragedies through the experience of Dr. David Prezant, an Einstein professor who — as Deputy Chief Medical Officer at the Fire Department of New York — was at ground zero directing a triage unit that day and nearly died when the South Tower fell. Dr. Prezant would subsequently document the health effects experienced by first responders who rushed to the scene that day. He would also establish a groundbreaking health care program for those first responders and successfully lobby for lifelong federal support for their care. The 9/11 article describes key findings from the more than 100 attack-related papers that Dr. Prezant has published on the health effects that first responders have endured. In addition, the article goes beyond the data in those studies to tell the compelling stories of three World Trade Center first responders whose health data were used to inform Dr. Prezant’s studies and who have benefited from the findings. These three men had run toward ground zero while most others had fled, and the stories illustrate how heavily they have paid for their heroism.

“On 9/11, when the Twin Towers were burning, FDNY firefighters ran into those buildings. By the time the second plane hit, most realized that this was not going to be just a fire; this was an attack. And yet they continued to run in. I have a patient who told a younger firefighter, ‘You go left, I’ll go right.’ That younger firefighter died. And that older firefighter, because of that decision, feels he was responsible for that firefighter’s death. He woke up every night screaming for the first six months. And now he wakes up screaming less, but still so often that his wife sleeps in a separate room. That’s not the way things should be.”

What is one thing you learned from this experience?
I learned that federal, state, and local authorities should have insisted that people working at ground zero wear respirators or masks. Such devices might have helped.