Even before the pandemic, the general public had positive perceptions of medical schools and teaching hospitals. Here’s what else they think about academic medicine, the doctor shortage, health equity, holistic review, and what they value in a physician.

The COVID-19 pandemic has wrought enormous changes in health care. It has also demonstrated the heroic dedication of health care teams on the front lines, including at teaching hospitals, and the public has responded by showering them with outright displays of appreciation, online accolades, and even meals delivered to the hospital.

The truth is, the public already had a fairly high opinion of medical schools and teaching hospitals, according to results of the 2019 AAMC Public Opinion Research, a biannual poll of registered voters. “Certainly, the pandemic is demonstrating the value of academic medicine and the critical role that medical schools and teaching hospitals play in our health care system — caring for the most complex and difficult medical cases, providing care for the poor and uninsured, and conducting research to advance medical knowledge and treatment,” says Elisa Siegel, chief communications and marketing officer for the AAMC.

While the 2019 research was conducted before the COVID-19 pandemic took hold, it showed that the vast majority of the public — about 69% — has a favorable opinion of teaching hospitals; a percentage that rises to 78% if an individual or one of their family members had been treated at a teaching hospital. Sixty-six percent of registered voters also have a favorable opinion of medical schools, with the majority (68%) saying that medical schools do a better job of training doctors in medical knowledge than bedside manner.

AAMCNews recently sat down with Siegel to discuss some of the other findings of the 2019 research.

Q: Can you talk about what the public knows and doesn’t know about academic medicine?

A: We know from 25 years of doing this research that the public has consistently favorable perceptions of medical schools and teaching hospitals. The public understands that medical schools and teaching hospitals are places of great knowledge and expertise. They understand the role that these institutions play in educating future generations of physicians and the importance of these institutions in fostering medical innovation, whether it’s medical research or new treatments. They also recognize the economic value that these institutions bring to a community, not just in terms of jobs but also the types of jobs; if you have a medical research hub in your community, that’s a very strong point of pride. But the one consistent finding since we began this research in 1996 is that the general public does not understand the term “academic medical center.” When you say academic medicine, to the public that could mean “theoretical medicine.” It’s academic; it’s not a place where medicine is actually delivered. So that’s why we always recommend, when talking to the general public or communicating about the value of academic medicine, using the terms “medical schools” and “teaching hospitals” or “university hospitals” since the public is much more familiar with those terms. 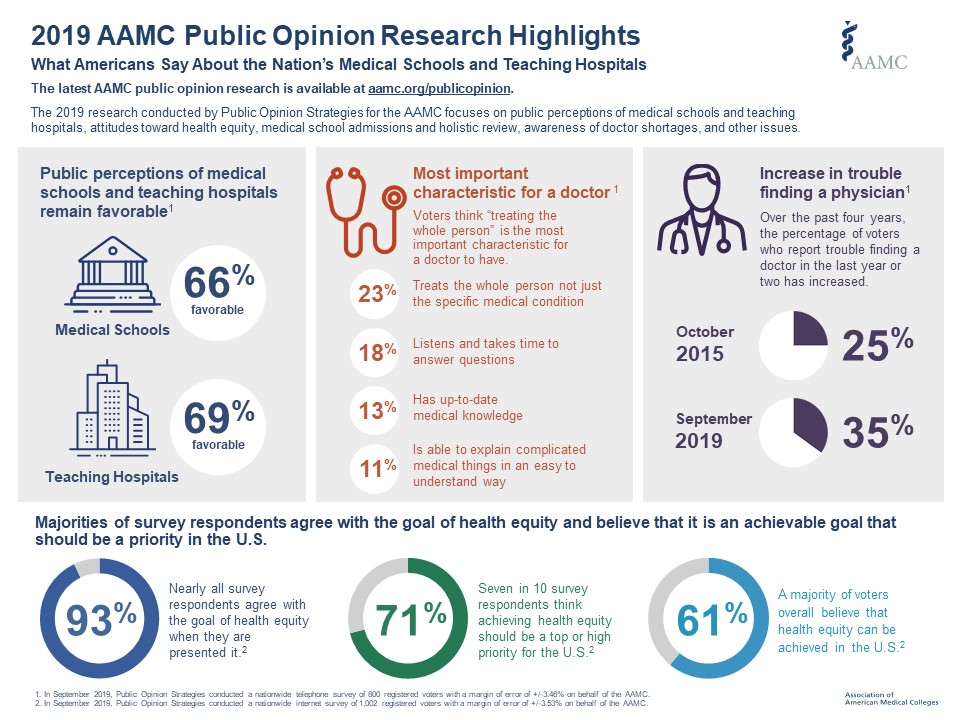 Q: We’ve seen during the pandemic that medical research is critical, not just to advance our understanding of this novel coronavirus and the way it infects and sickens people, but also to find treatments and eventually a vaccine. This research takes federal dollars, and the AAMC’s poll found broad public support for increasing this funding. Was this a surprise?

A: As we’ve seen in the past, there’s pretty strong support among the public for the missions of medical schools and teaching hospitals. The support is stronger among Democratic voters than Republicans. But interestingly, medical research is one area that transcends that partisan divide. We found strong support among both Democratic and Republican voters for increased federal funding to support medical research.

Q: The AAMC has been tracking attitudes toward the doctor shortage since 2006. But the 2019 AAMC Public Opinion Research saw significant changes in this area. What can you tell us about this?

A: As in the past, a majority of voters — 65% — consistently believe the United States does not have enough doctors to meet the nation’s health care needs, with 75% of those living in rural areas feeling this way. What was different this year was the number of people who had trouble finding a doctor in the past two or three years; that jumped from 25% in 2015 to 35% in 2019 — a 10-point jump. A majority of voters also believe there are shortages in both primary care doctors (61%) and specialty physicians (53%). That’s the highest number we’ve seen since we started asking this question in 2006. Certainly, the COVID-19 pandemic is illustrating the importance of making sure we have an adequate supply of physicians — specialists as well as primary care doctors. We need more doctors and other health professionals, not just to address immediate needs during this pandemic but also because we have a growing, aging population.

Q: Public attitudes toward health equity and health disparities were new areas of study in the 2019 AAMC Public Opinion Research. But less than half of all respondents are familiar with the terms “social determinants of health,” “health equity,” and “health disparities.” What do you make of these findings?

A: One thing we need to recognize is that we often talk in a language that the public doesn’t understand. The good news is that, if you explain these concepts, the public is extremely supportive. For instance, 51% of the public did not understand the term “social determinants of health,” but majorities of respondents believe that being homeless, lacking adequate food, living in an unsafe neighborhood, or being poor can have a negative influence on a person’s health. Likewise, 93% of the people we surveyed agreed with the overall goal of health equity and 7 in 10 think it should be a top priority for the United States, with 44% saying the federal government is most responsible for achieving health equity. The COVID-19 pandemic is just laying bare the tremendous disparities that exist because of these societal issues.

Q: The 2019 Public Opinion Research also tested public awareness of the process of holistic review — defined as the process of assessing an applicant in the context of any obstacles they may be facing — in medical school admissions. What did you find in this area?

A: We tested five different terms to explain the process of reviewing and admitting applicants to medical school. And of the five terms, holistic review was the least positive term we tested, with 3 in 4 respondents saying they are not familiar with it. It just shows how we might label something, use it widely, and make an assumption that the public understands the label. The good news is that, when we gave voters a detailed definition of the holistic review and admissions process that medical schools use, more than 7 in 10 supported that process. Majorities of voters we surveyed also supported the reasons that medical schools use holistic review in screening applicants, including that holistic review produces a diverse workforce, which can reduce health disparities.

Q: Finally, the AAMC polled voters on what it takes to be a good doctor. Surprisingly, these findings change from year to year. What were the highlights in the 2019 research?

A: The top three most important characteristics of a good doctor in 2019 were the ability to treat the whole person, not just the specific medical condition; to listen and take time to answer questions; and to have up-to-date medical knowledge. In other years, characteristics like being board-certified and having a good bedside manner were higher up in the list of desirable attributes. So I think this might reflect some broader societal attitudes about what makes a good doctor. It’s always helpful to see what the public thinks.