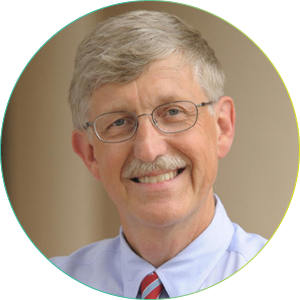 As the 16th director of the National Institutes of Health (NIH), Dr. Collins has been a loyal and vocal champion of biomedical research. Initially appointed by President Barack Obama in 2009, Dr. Collins was subsequently asked by both the Trump and Biden administrations to continue in his role, making him one of the only presidentially appointed NIH directors to serve more than one administration.

For more than a decade as director, Dr. Collins has managed the world’s premier biomedical research agency, pioneering initiatives to advance science, strengthen the biomedical research workforce, and develop programs to enhance the prevention, diagnosis, and treatment of disease. Millions of patients living with chronic conditions or facing life-threatening illnesses have benefitted significantly from the discoveries and programs established under Dr. Collins’ leadership, from the All of Us Research Program to the Helping to End Addiction Long-Term Initiative. In addition to his scientific leadership, Dr. Collins has spearheaded efforts to address longstanding challenges within the scientific community, including meaningful reforms such as UNITE, an initiative established to address structural racism.

The NIH has served as a beacon during the COVID-19 pandemic. Dr. Collins has engaged meaningfully with leaders of academic medicine throughout the pandemic, supporting extensive research and discoveries to combat COVID-19. He provided direction for the scientific community, advancing our understanding and response to COVID-19 through major initiatives including the Rapid Acceleration of Diagnostics (RADx), Accelerating COVID-19 Therapeutic Interventions and Vaccines, COVID-19 Prevention Trials Network, and other key programs. His leadership acumen and depth of expertise have been instrumental in the agency’s ability to deliver on the hope of a healthier future.

Prior to his appointment as NIH director, Dr. Collins served as director of the National Human Genome Research Institute. While there, he led the international Human Genome Project, which culminated in April 2003 with the completion of a finished sequence of the human DNA instruction book.