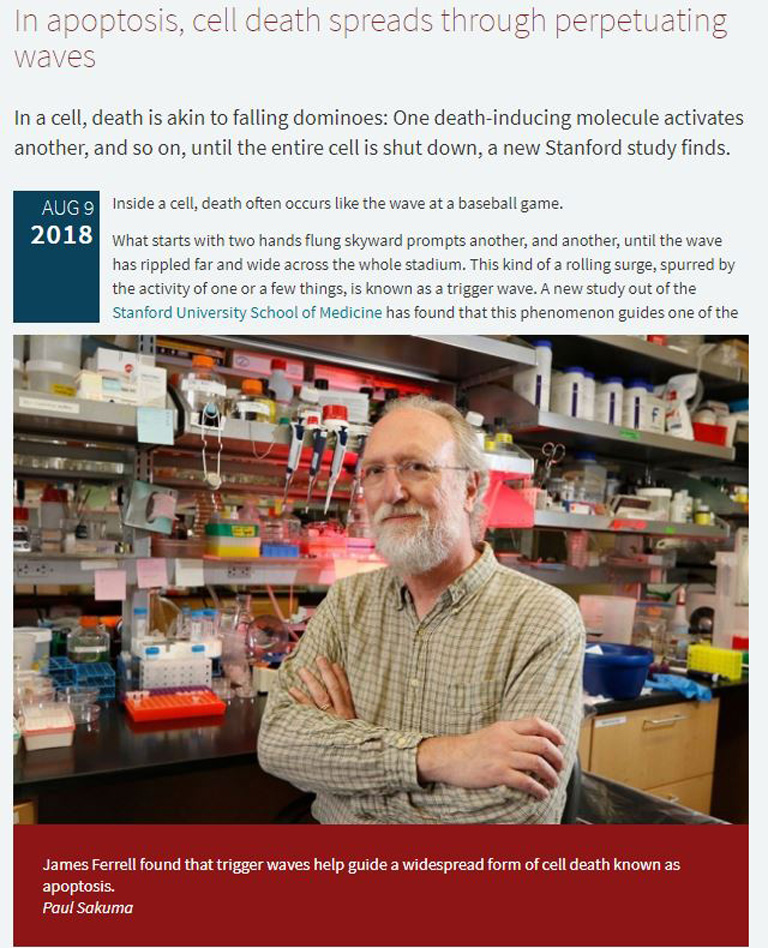 “Inside a cell, death often occurs like the wave at a baseball game. What starts with two hands flung skyward prompts another, and another, until the wave has rippled far and wide across the whole stadium. This kind of a rolling surge, spurred by the activity of one or a few things, is known as a trigger wave. A new study out of the Stanford University School of Medicine has found that this phenomenon guides one of the most well-known and widespread forms of cell death: apoptosis.”

The piece describes a new discovery made by James Ferrell, PhD, professor of chemical and systems biology and of biochemistry, and his research team showing how a cell undergoes apoptosis, a type of cell death. It turns out that apoptotic cells die by way of something called a “trigger wave.” These waves are self-perpetuating — think of the phenomenon that governs the collapse of a row of dominoes. Inside the cell, certain death-inducing molecules initiate the activation of one another, spreading death far and wide across the cell. Trigger waves can be found in other aspects of biology, such as neuron-to-neuron communication, and Ferrell thinks scientists will continue to discover more wave-dependent processes that contribute to human biology.

Anytime you have to convey a concept that’s very in-the-weeds, it’s a challenge. Devising interesting, accurate depictions of the research and the concepts behind it was a fun challenge in writing this piece.

Apoptosis is likely the most well-understood form of cell death, and yet it’s still somewhat opaque to researchers. This discovery helps advance our understanding of how cells perish, a critical component of death and disease.