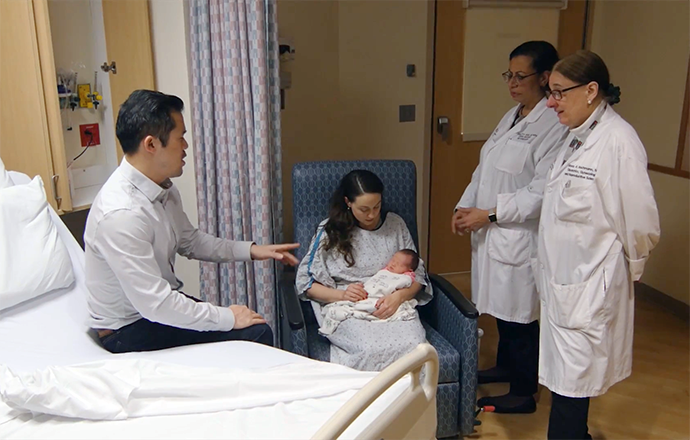 Rutgers Robert Wood Johnson Medical School has been a pioneer for maternal health awareness and initiatives designed to reduce incidents of maternal mortality. Every day, two women on average die in the United States following childbirth, and an additional 1,000 women are affected each week by severe complications during delivery. Between 1993 and 2013, maternal mortality rates in the United States have increased nearly 56%. Robert Wood Johnson Medical School initiated an interprofessional training course five years ago aimed at raising awareness of the problem and educating health care providers on strategies to reduce these statistics. Together with The Tara Hansen Foundation, the medical school helped develop a Stop! Look! and Listen! maternal safety campaign and an annual teaching module for medical students.

Because of the continued need to address this critical health issue, the medical school joined with The Tara Hansen Foundation, Rutgers New Jersey Medical School, the New Jersey Section of the American College of Obstetricians and Gynecologists, the New Jersey Obstetrical and Gynecological Society, the Association of Women’s Health Obstetric and Neonatal Nurses, and the New Jersey Affiliate of the American College of Nurse Midwives to lobby for support of an annual Maternal Health Awareness Day in New Jersey that would shine further light on the problem. In May 2017, the first Maternal Health Awareness Day in New Jersey was set for Jan. 23, 2018 — believed to be the first of its kind nationally.

What was the most successful part of your campaign?

Professionally, being mentioned in The New York Times and Nightly News were major highlights. From an advocacy standpoint, seeing women and their family members inquire about safety and having so many reputable health care organizations wanting to participate in Health Awareness Day.

By working together and having a strong message across communication vehicles, we could empower women’s voices.