When the White House issued its Jan. 27 executive order barring foreign nationals from seven countries from entering the United States, I found myself thinking about my experience as a physician-researcher at the National Institutes of Health (NIH). Joining the NIH shortly after I finished my residency, I worked alongside brilliant physicians from countries such as Romania and Poland, which were then under communist rule, as well as Syria and other nations now in the news. The experience opened my eyes to the practical advantages of bringing together people with unique worldviews and experiences in health research. For decades, our nation’s openness to scientific collaboration has brought top physicians and scientists from around the world to the United States, which in turn has positioned the United States as a global leader in medical research, strengthened our economy, and bolstered public health.

While the executive order may be intended as a short-term pause for national security, the implications for medical education and health care delivery—the foundations of our nation’s health security—could be significant and long-term. Most immediately, the order jeopardizes the possibility that many international medical graduates will be able to come to the United States to continue their training. With Match Day approaching on March 17, an estimated 1,000 foreign medical graduates from the seven countries named in the executive order have already applied for residency programs and fellowships in the United States. These programs are now going through the process of selecting qualified applicants, and the executive order has created confusion around whether these learners will be able to come to this country for training and the possible continuation of their medical careers. 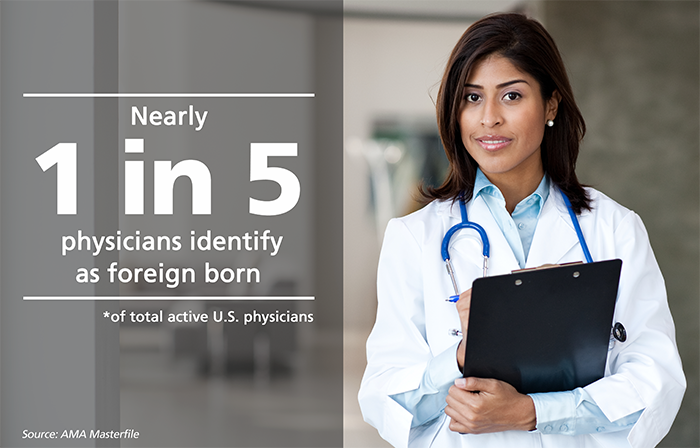 Physicians educated in other countries have long played an important role in American health care. Today, nearly one out of every five practicing physicians in the United States identifies as foreign born, and many of these doctors work in rural and underserved communities. Given the real and significant doctor shortage facing our nation, current immigration pathways are vital to ensuring access to care and sustaining our physician workforce. These programs include student, exchange visitor, and employment visas, such as the National Interest Waiver and the Conrad 30 J-1 Visa Waiver. The Conrad 30 Waiver program alone has directed nearly 10,000 primary care and specialty physicians to rural and urban underserved communities in the last decade. Preventing these physicians from training and practicing in underserved areas in the United States will mean that the most vulnerable patients will face greater difficulty getting access to care when they need it.

But what these physicians contribute to American health care goes beyond helping to meet our physician workforce needs. As I discovered working alongside my NIH colleagues, the life experiences and the cultural backgrounds that each of us brings to our work make for more robust and effective health care teams. To be effective, physicians require broad cultural competence and an understanding of the social and cultural factors that affect health. A health care workforce that reflects the diversity of our communities results in better care for everyone. And the impact of this ban on health care will extend far beyond residency training—it also affects scientists and graduate students who are looking to continue their research in the United States, faculty who would enhance American medical education, and seriously ill patients who were planning to travel here for life-saving treatments that only U.S. hospitals provide.

When we close our borders to individuals, we are also closing them to collaboration, discovery, and better national and global health. Disease, on the other hand, knows no national boundaries. When the Ebola virus became an epidemic in 2014, it jumped borders and even crossed oceans. Health care professionals from all over the world traveled to West Africa to learn about the local experience of the disease and help stop the epidemic at its source. At the same time, researchers hunted for solutions and public health officials prepared for the virus to reach U.S. shores. The virus was ultimately contained through a multinational strategy that involved the collaboration of researchers and doctors from all over the world. The importance of international cooperation in managing disease outbreaks has been proven time and again, with Ebola, AIDS, and most recently the Zika virus.

As health professionals, we are guided by evidence. And there is clear evidence that raising barriers to keep out scientists, researchers, and doctors will not just interrupt the careers of those individuals, it will harm patients and have a chilling effect on medical research. Immigration and international mobility have proven to be critical to the success of health care in America. We urge the administration to carefully consider the health care needs of the nation as they debate the future of this executive order.