LGBTQ+ medical students and residents often walk in two worlds—one they share comfortably with other people who belong to sexual and gender minorities, and another where they fear discrimination, according to Anthony Gacita, an MD-PhD student in the Medical Scientist Training Program at Northwestern University Feinberg School of Medicine.

“You’re unsure which world you’re stepping into in a classroom or clinic,” he explained. “You come out every time you meet a new person or new group.”

Medical schools need to acknowledge this feedback as a first step toward creating more welcoming, inclusive environments for LGBTQ+ students, said Teresa Mastin, PhD, director of the Office of Diversity and Inclusion at Feinberg School of Medicine. “If you’re not talking about it, it’s easy to pretend it’s not a problem. It has to be top of mind.”

“LGBTQ+” is used to encompass all members of the sexual behavior minority and gender identity minority communities. In a national survey conducted by researchers at Stanford University School of Medicine, about a third of 912 respondents who identified as sexual and gender minorities said they chose not to disclose their sexual or gender identity status during medical school. The study, published in Academic Medicine (2015), revealed that 43.5 percent who identified as “sexual and gender minority” reported fear of discrimination. Other reasons for nondisclosure included social pressure, lack of peer support, and fear that being open about it could adversely affect one’s evaluation or career.

There is anecdotal evidence that LGBTQ+ medical students are not feeling accepted on campus as well. During an AAMC webinar on this subject, presenter Nicole (Nix) Sitkin, a third-year student at Yale School of Medicine, recounted a story from one student who said a clinician openly referred to a transgender person as “it and he/she.”

Adrian M. Daul, MD, MPH, assistant professor at Emory University School of Medicine, told about a student who wore a skirt for the first time in a decade to her medical school interview. The student felt she had to “look a certain way,” said Daul.

A 2014 study in the Journal of Surgical Education also reported that more than 30 percent of LGBTQ+ residents concealed their sexual orientation when applying for general surgery residencies for fear of not being accepted by peers.

“The hidden curriculum in medical education promotes a culture in which being cisgender and straight is assumed,” explained Sitkin. “Anything else is ‘abnormal’ and thus remarkable. In this context, students and even faculty perceive—sometimes, sadly, accurately—that being openly LGBTQ can put them at risk for discrimination.”

Concealing sexual or gender identity and/or experiencing discrimination “causes significant amounts of anxiety and depression,” said Michael Upton, MD, assistant professor of psychiatry at The University of Vermont (UVM) College of Medicine. “It also interferes with students’ ability to develop open, effective mentoring relationships to help with their professional identity development,” added Upton, who serves as faculty development liaison for the College of Medicine’s Office of Diversity and Inclusion and coadvisor to the school’s Gender and Sexuality Alliance student group.

“LGBTQ medical students and residents often walk in two worlds—one they share comfortably with other LGBTQ people and another where they fear discrimination.”

To create a more welcoming climate, many institutions host events for students, faculty, and staff to network. LGBT-Meds, an organization at Stanford School of Medicine, for example, holds a Coming Out Day and sponsors lectures on LGBTQ+ health topics. Feinberg’s The Queers & Allies student group at Feinberg School of Medicine created an OutList, a voluntary, public listing on which about 130 students, residents, fellows, faculty, and staff can identify as LGBTQ and network.

“Being able to speak to an experienced ‘out’ faculty member about choosing a career path or how to manage homophobia with patients or in the work environment is an invaluable asset to LGBT-identified students,” Upton noted.

One sign of progress is that inclusion is promoted more publicly than in the past. Medical students at UVM, for example, wear their white coats and march alongside faculty, staff, and administration in their community’s annual Gay Pride parade.

An increasing number of schools also have “Safe Zone” programs offered by the Gay Alliance to promote inclusion and to train students and faculty about developing settings that are supportive of LGBTQ individuals.  The University of Miami Miller School of Medicine, for example, offers trainings every two months to administration, faculty, and students.

Still more to do

Despite progress, more must be done to create a welcoming environment for LGBTQ+ students, said Gacita. “Schools have to dispel baseline notions of discrimination or fear and be active in supporting LGBTQ students.”

“It’s common for faculty to mix ‘sex’ and ‘gender’ when they usually mean ‘sex.’ We cringe a little when they do,” Gacita observed. “Faculty development [programs] could demonstrate how to ask students about their identity and orientation without making presumptions. It’s a skill to ask someone what terms they use. There’s a lot of anxiety around the terms, so it’s better to allow people to tell you.” 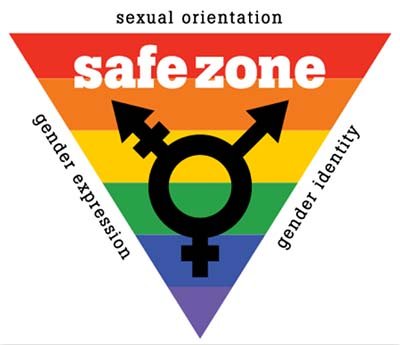 Upton stressed that change needs to come from the top down. “We’ve made a ton of progress since I was ‘minimally out’ in medical school—I graduated in 1994. But there are places where it’s more of a struggle than it is at our institution. Leadership needs to speak to this. When [leaders] are visibly involved, it shows that the institution values fairness and equity.”

Upton and Mastin participated in the AAMC’s Healthcare Executive Diversity and Inclusion Certificate Program, which provided ways for leaders to improve inclusion and diversity at their institutions.

Leaders can make institutional changes that are “simple to do and not a big deal,” said Daul. “Having all-gender bathrooms sends a strong message of welcome to transgender and gender-nonconforming people. Including categories on admissions forms that encourage people to identify beyond checking a box for male or female shows students that the school cares and welcomes diversity. It sends a strong message that an institution is cool with this and wants you to feel safe and seen.”

Welcoming environments for LGBTQ+ students also benefit patients because significant health disparities exist among sexual and gender minorities, Daul added. If LGBTQ+ patients “who often tend to delay seeking health care, can find a physician who is knowledgeable and understanding about LGBTQ concerns, or who may identify as a sexual or gender minority, [they] are more likely to seek care sooner.”

When an Emory colleague established a clinic for transgender health care, “[patients] began coming from four states. It doesn’t take an endocrinologist to manage uncomplicated hormone therapy, but they couldn’t get care in the rural areas where they live,” Daul said. “[The availability of care] is really a social justice issue with strong health implications. People look up to doctors. We should be on the front lines of this [disparity]. Medical professionals should be the people who start to fix this.”