Author Q&A: When Less is More in Medical Care

H. Gilbert Welch, MD, MPH, professor of medicine at Geisel School of Medicine at Dartmouth, is in many ways the typical triple-threat academic physician: he practices (general internal medicine), conducts research (on health care utilization), and teaches (epidemiology, biostatistics, and health policy within The Dartmouth Institute for Health Policy and Clinical Practice). But less typical is that he challenges orthodoxy in his research. He asks whether screening for cancer, in fact, “saves lives” and whether more medical care is really the path to a healthier society.

Also unusual in academic medicine is that Welch writes for the lay press, including the New York Times, as often as for peer-reviewed journals. He is the author or co-author of several books for the general public, including Overdiagnosed: Making People Sick in the Pursuit of Health; and Should I Be Tested for Cancer? Maybe Not and Here’s Why. His newest book is Less Medicine, More Health.

The subtitle of your latest book is “7 Assumptions That Drive Too Much Medical Care.” Can you explain the premise?

I’m a conventionally trained physician and a great believer in medical care—it can do a lot of good, particularly for people who are acutely ill or injured. But there’s growing recognition that some people get too much medical care, especially those who are well and those near the end of life.

Some blame our fee-for-service system—the fact that doctors make more by doing more. But money isn’t the sole factor. The general public harbors fundamental assumptions about the value of medical care that lead them to believe that more medical care is always better. I want to help people understand that everything we doctors do has some [potential] harm, which requires balancing that with the benefits.

Can you give an example of what you mean by “too much medical care”?

It’s the “too many” problem. Too many tests and referrals lead to too many diagnoses; that means patients are prescribed too many medications and receive too many procedures.

The Seven Assumptions That Drive Too Much Medical Care

Your work has received both high praise and criticism from physicians. How do you reconcile this?

Doctors are heterogeneous. There are lots of excellent doctors, but some have terrible financial conflicts and others are, quite understandably, true believers in their specialty—it’s hard for them to think they’ve overstated the value of what they do.

But my sense is that most physicians are well aware the system has gotten a little out of control. Nearly half of primary care physicians report their patients get too much care. They appreciate having someone articulate these ideas because they’re tough to explain in a typical office visit.

What do you suggest that doctors say to patients who ask for more medical intervention than the physician feels is necessary?

That’s why I wrote the book. It takes time to question the conventional wisdom that more medical care is always better; it’s not going happen in a 10- to 15-minute clinic visit. Much of the messaging patients hear exaggerates the benefits of medical care and minimizes the harms. A lot is straight-out advertising or influenced by manufacturers, and until recently, the media was pretty noncritical—everything was an “amazing breakthrough.”

That said, an increasing number of patients know that the system promotes too much medical care and are quite open to a more balanced approach.

And doctors are increasingly accepting the idea that many patients get too much care?

Yes. A broad swath of the physician community today understands these problems and is happy they’re being vocalized. That wasn’t the case 20 years ago, when I started this work. Back then, I was two or three standard deviations from the mean. But the mean has moved; I’m making the same case, but it’s closer to the mean. 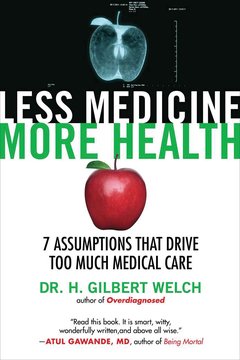 At the same time, the problem is far from solved. Take the explosion in new diagnostics [genetic assays, biomarker testing, monitoring devices] and the push to sell them directly to the public. But is looking hard for things to be wrong really the path to a healthier society?

In your book, you describe the rush to assume benefit from bone marrow transplantation for advanced breast cancer before [the procedure] was thoroughly tested. Do you see other examples of this?

Sure—liquid biopsies, the effort to detect tumor products in the blood. It’s possible that liquid biopsies will be the solution to cancer, but I seriously doubt it. I’m happy to have liquid biopsies rigorously tested but not to have them launched on the public before there’s evidence they really help.

I worry that if we test everyone for stray evidence of cancer cells, lots of people will be positive; we will see evidence that our immune systems deal with small cancers every day. Do we really want to label everyone as sick?

What has inspired you to donate all your royalties to charity?

If I’m raising questions about financial interests, I want to be free of them myself—I don’t want to be accused of saying dramatic things just to sell books

This article originally appeared in print in the May/June 2016 issue of the AAMC Reporter.