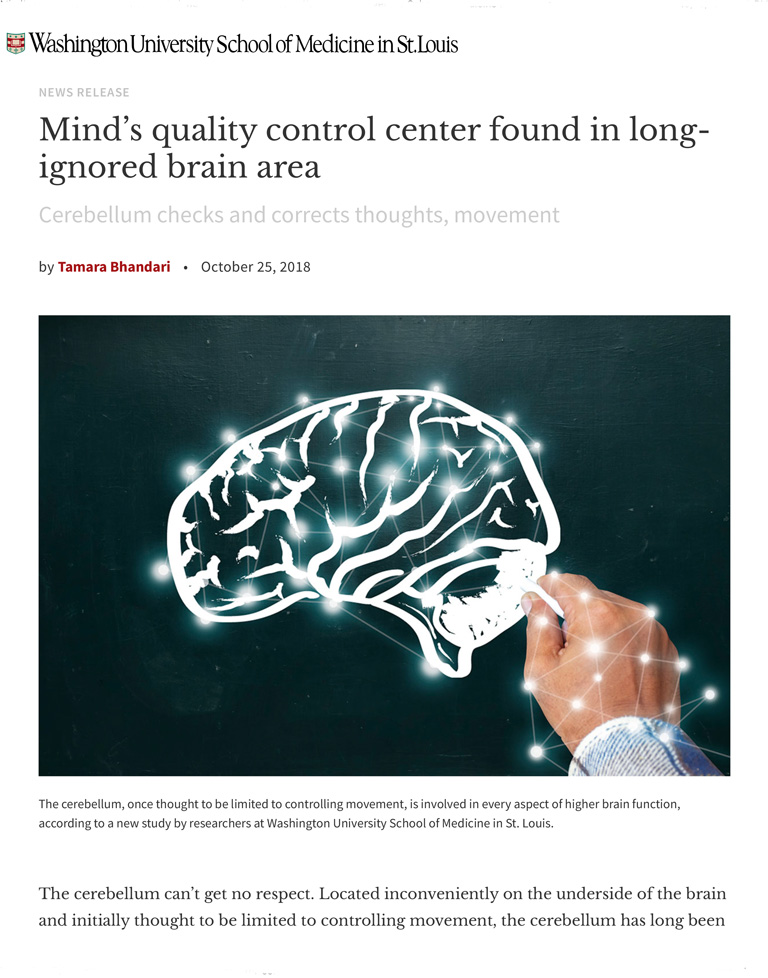 “The cerebellum can’t get no respect. Located inconveniently on the underside of the brain and initially thought to be limited to controlling movement, the cerebellum has long been treated like an afterthought by researchers studying higher brain functions.

“But researchers at Washington University School of Medicine in St. Louis say overlooking the cerebellum is a mistake. Their findings, published Oct. 25 in Neuron, suggest that the cerebellum has a hand in every aspect of higher brain functions — not just movement, but attention, thinking, planning and decision-making…

“‘Our research strongly suggests that just as the cerebellum serves as a quality check on movement, it also checks your thoughts as well — smoothing them out, correcting them, perfecting things,’ said senior author Nico Dosenbach, MD, PhD.”

Studies of higher brain functions have mostly disregarded the cerebellum. But findings of researchers at Washington University School of Medicine in St. Louis suggest that the cerebellum has a hand in every aspect of higher brain functions. Unexpectedly, the findings may help explain why inebriated people tend to make ill-advised decisions. The cerebellum is quite sensitive to alcohol. Just as a person staggers drunkenly because his or her compromised cerebellum is unable to perform the customary quality checks on motor function, alcohol-fueled bad choices might reflect a breakdown of quality control over thinking skills.

This study was very basic and very complex, so the challenge lay in explaining what the scientists discovered and how they made their discovery in easy-to-understand terms.

By itself, I think a story about the function of an obscure brain region would not have had much impact. It was the connection to everyday behavior — specifically, drunken behavior — that made people sit up and take notice.