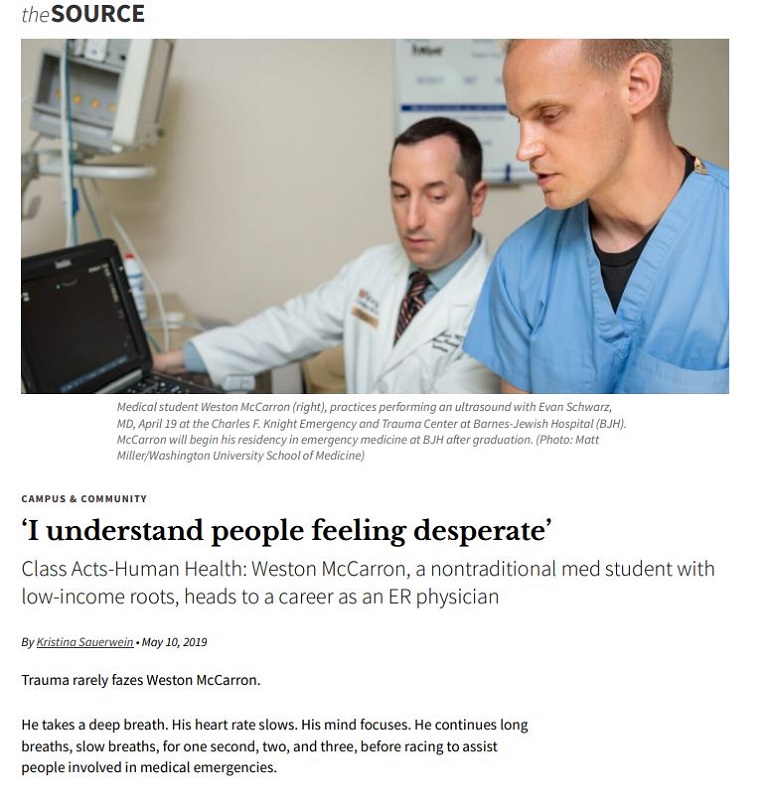 “It took a moment for his brain to process that his 27-year-old brother, his best friend and work partner, had hung himself with an extension cord while his pregnant wife and 2-year-old son lay in bed.…While grieving, McCarron said: ‘I realized that here it was, a decade after I had first thought of medical school. I had been doing other jobs, but none of them seemed to truly matter. I wasn’t helping people. I wasn’t helping to improve the world. I had been waiting for the right moment to come along. I realized that the right moment would never come. I was going to turn 30. If I was going to make medical school happen, I just had to do it.’”

The profile chronicles Weston McCarron’s unlikely journey from Jerome, Idaho, a small town blighted by poverty, unemployment, and a lack of health care resources, to Washington University School of Medicine in St. Louis, a top-tier medical school where he received a full scholarship and accolades from faculty and peers. Unlike many of his classmates who spent much of their lives academically preparing to become physicians, McCarron never considered medicine until his late 20s. When he applied to medical school, McCarron was in his 30s, married, and a father of four who had worked for more than a decade as a computer scientist, radio engineer, construction company owner, real estate agent, radio station owner, church elder, body piercing artist, and high school teacher. Ultimately, however, it was the suicide of McCarron’s drug-addicted brother and other traumatic experiences that nurtured his ability to remain calm and focused during a crisis and pivoted him toward a career in emergency medicine. The narrative locked McCarron’s past to his future ambitions in the medical field. “I understand people feeling desperate,” McCarron said. “I’m finally on a career path that allows me to do good in the world.”

Spotlighting a student’s personal journey into medicine inspired current and prospective students — as well as general readers — to pursue ambitions despite personal obstacles. It also enhanced the medical school’s reputation and highlighted its commitment to diversity, which includes nontraditional students.

By far, the biggest challenge entailed portraying the student’s personal history and struggles in an accurate, authentic, and straightforward yet compelling manner. I wanted it to resonate with readers and ring true to the student who was profiled.