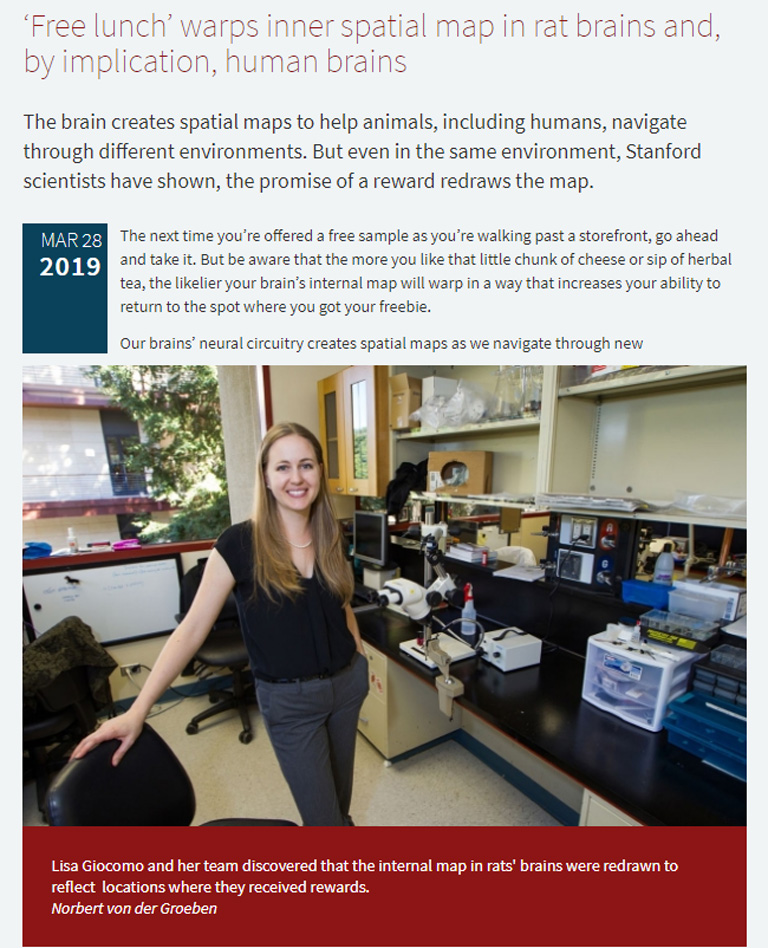 “The next time you’re offered a free sample as you’re walking past a storefront, go ahead and take it. But be aware that the more you like that little chunk of cheese or sip of herbal tea, the likelier your brain’s internal map will warp in a way that increases your ability to return to the spot where you got your freebie.”

The brain creates spatial maps to help animals, including humans, navigate through different environments. But even in the same environment, the promise of a reward redraws the map. A study published in Science showed how such maps get redrawn when rats learn they’ll receive a reward at a certain place on the map. Rats’ spatial mapping system is the same as ours, so this same process may turn out to play a role in addictive behavior in humans.

“Every time you check your Google map for a particular address or restaurant name or pair of grid coordinates, you get the same map regardless of why you’re looking at it,” the study’s senior author, Stanford research Lisa Giocomo, told me. Scientists have assumed the brain’s internal GPS operates similarly. But, Giocomo’s team showed, that’s not quite right. Instead, rats’ brains make a new map of a space in response to their experience of a reward that reflects the importance of the place where they got the reward by providing a more accurate representation of its position.

Scientists are often perfectly capable of describing their work in simple, engaging, unguarded, jargon-free language. Such descriptions are unlikely to be found in the papers they publish in peer-reviewed journals.

When I initially read the study, it seemed that it would be impossible to explain its findings to nonscientists. But a steady dialog with the senior author spurred a series of analogies that promised to be more accessible.